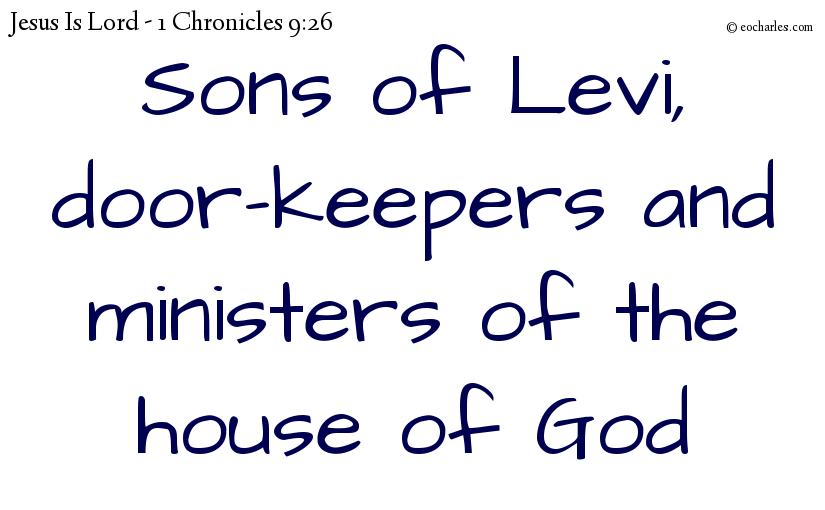 For the four chief door-keepers, who were Levites, had a special position, looking after the rooms and the store-houses of the house of God.
1 Chronicles 9:26

1Ch 9:26 For the four chief door-keepers, who were Levites, had a special position, looking after the rooms and the store-houses of the house of God.
1Ch 9:27 Their sleeping-rooms were round the house of God, for they had the care of it, and were responsible for opening it morning by morning.
1Ch 9:28 Certain of them had the care of the vessels used in worship, to keep an account of them when they came in and when they were taken out again.
1Ch 9:29 And some of them were responsible for the holy things and for the vessels of the holy place, and the meal and the wine and the oil and the perfume and the spices.
1Ch 9:30 And some of the sons of the priests were responsible for crushing the spices.
1Ch 9:31 And Mattithiah, one of the Levites, the oldest son of Shallum the Korahite, was responsible for cooking the flat cakes.
1Ch 9:32 And some of their brothers, sons of the Kohathites, were responsible for the holy bread which was put in order before the Lord, to get it ready every Sabbath.
1Ch 9:33 And these were those who had the ordering of the music and songs, heads of families of the Levites, who were living in the rooms, and were free from other work, for their work went on day and night.
1Ch 9:34 These were heads of families of the Levites in their generations, chief men; they were living at Jerusalem.