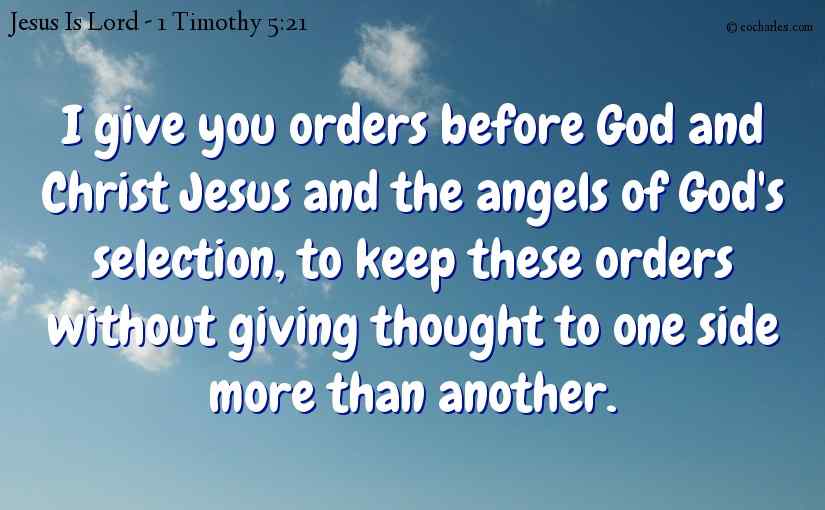 I give you orders before God and Christ Jesus and the angels of God’s selection, to keep these orders without giving thought to one side more than another.
1 Timothy 5:21 BBE

1Ti 5:1 Do not say sharp words to one who has authority in the church, but let your talk be as to a father, and to the younger men as to brothers;
1Ti 5:2 To the older women as to mothers, to the younger as to sisters, with a clean heart.

1Ti 5:3 Give honour to widows who are truly widows.
1Ti 5:5 Now she who is truly a widow and without family puts her hope in God, giving herself to prayer day and night.
1Ti 5:9 Let no woman be numbered among the widows who is under sixty years old, and only if she has been the wife of one man,
1Ti 5:10 And if witness is given of her good works; if she has had the care of children, if she has been kind to travellers, washing the feet of the saints, helping those who are in trouble, giving herself to good works.
1Ti 5:14 So it is my desire that the younger widows may be married and have children, controlling their families, and giving the Evil One no chance to say anything against them,
1Ti 5:15 For even now some are turned away to Satan.

1Ti 5:17 Let rulers whose rule is good be honoured twice over, specially those whose work is preaching and teaching.

1Ti 5:19 Do not take as true any statement made against one in authority, but only if two or three give witness to it.

1Ti 5:20 Say sharp words to sinners when all are present, so that the rest may be in fear.

1Ti 5:22 Do not put hands on any man without thought, and have no part in other men’s sins: keep yourself clean.

1Ti 5:25 In the same way, there are good works which are clearly seen; and those which are not so, may not be kept secret.