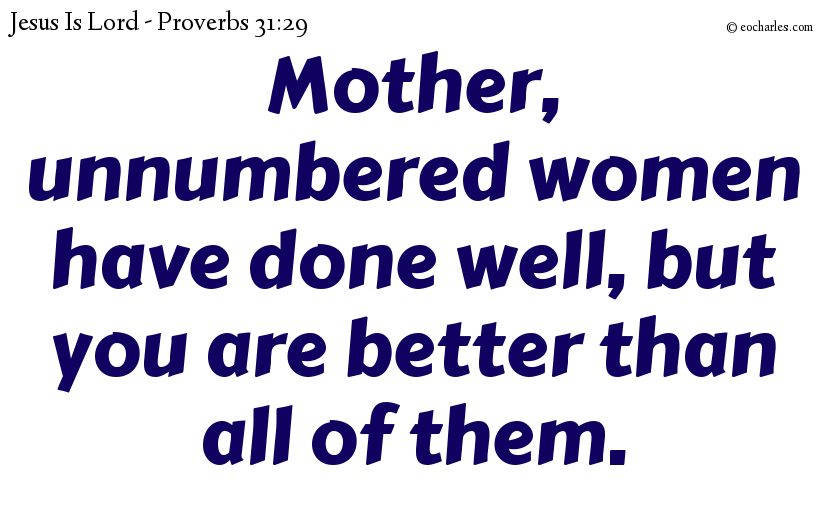 Unnumbered women have done well, but you are better than all of them.
Proverbs 31:29

1)Exo 20:12 Give honour to your father and to your mother, so that your life may be long in the land which the Lord your God is giving you.
END_OF_DOCUMENT_TOKEN_TO_BE_REPLACED

Whoever does God’s pleasure, the same is my brother, and sister, and mother.
Mark 3:35

Her children get up and give her honour, and her husband gives her praise, saying, Unnumbered women have done well, but you are better than all of them.
Proverbs 31:28-29

END_OF_DOCUMENT_TOKEN_TO_BE_REPLACED

Pro 31:28 Her children arise up, and call her blessed;

Strength and self-respect are her clothing; she is facing the future with a smile.
Her mouth is open to give out wisdom, and the law of mercy is on her tongue.
She gives attention to the ways of her family, she does not take her food without working for it.
Her children get up and give her honour, and her husband gives her praise, saying,
Unnumbered women have done well, but you are better than all of them.
Fair looks are a deceit, and a beautiful form is of no value; but a woman who has the fear of the Lord is to be praised.
Give her credit for what her hands have made: let her be praised by her works in the public place.

Thank you Father, for the faith you gave our mothers. 4)Heb 11:11 And by faith Sarah herself had power to give birth, when she was very old, because she had faith in him who gave his word; 5)Gen 25:21 Isaac made prayer to the Lord for his wife because she had no children; and the Lord gave ear to his prayer, and Rebekah became with child.
Gen 25:22 And the children were fighting together inside her, and she said, If it is to be so, why am I like this? So she went to put her question to the Lord.
Gen 25:23 And the Lord said to her, Two nations are in your body, and two peoples will come to birth from you: the one will be stronger than the other, and the older will be the servant of the younger. 6)Exo 2:2 And she became with child and gave birth to a Son; and when she saw that he was a beautiful child, she kept him secretly for three months.
Exo 2:3 And when she was no longer able to keep him secret, she made him a basket out of the stems of water-plants, pasting sticky earth over it to keep the water out; and placing the baby in it she put it among the plants by the edge of the Nile.
Exo 2:4 And his sister took her place at a distance to see what would become of him.
Exo 2:5 Now Pharaoh’s daughter came down to the Nile to take a bath, while her women were walking by the riverside; and she saw the basket among the river-plants, and sent her servant-girl to get it.
Exo 2:6 And opening it, she saw the child, and he was crying. And she had pity on him, and said, This is one of the Hebrews’ children.
Exo 2:7 Then his sister said to Pharaoh’s daughter, May I go and get you one of the Hebrew women to give him the breast?
Exo 2:8 And Pharaoh’s daughter said to her, Go. And the girl went and got the child’s mother.
Exo 2:9 And Pharaoh’s daughter said to her, Take the child away and give it milk for me, and I will give you payment. And the woman took the child and gave it milk at her breast. 7)1Sa 1:20 Now the time came when Hannah, being with child, gave birth to a son; and she gave him the name Samuel, Because, she said, I made a prayer to the Lord for him.
1Sa 1:21 And the man Elkanah with all his family went up to make the year’s offering to the Lord, and to give effect to his oath.
1Sa 1:22 But Hannah did not go, for she said to her husband, I will not go till the child has been taken from the breast, and then I will take him with me and put him before the Lord, where he may be for ever. 8)Luk_1:7 And they were without children, because Elisabeth had never given birth, and they were at that time very old.
Luk_1:13 But the angel said, Have no fear, Zacharias, for your prayer has come to the ears of God, and your wife Elisabeth will have a son, and his name will be John. 9)Mat_1:18 Now the birth of Jesus Christ was on this wise: When as his mother Mary was espoused to Joseph, before they came together, she was found with child of the Holy Ghost. 10)Mat_1:20 But while he thought on these things, behold, the angel of the Lord appeared unto him in a dream, saying, Joseph, thou son of David, fear not to take unto thee Mary thy wife: for that which is conceived in her is of the Holy Ghost. 11)Mat_2:11 And when they were come into the house, they saw the young child with Mary his mother, and fell down, and worshipped him: and when they had opened their treasures, they presented unto him gifts; gold, and frankincense, and myrrh.

And today, at the gates, we praise and honor our mothers for being in awe of You.
May all the Glory be to you, God.
We Bless our mothers in Jesus name, Amen.