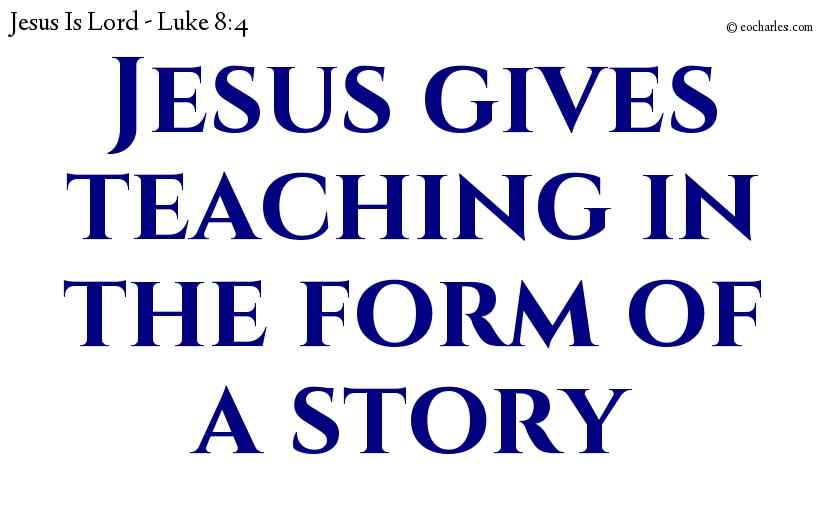 And when a great number of people came together, and men from every town went out to him, he gave them teaching in the form of a story:
Luke 8:4

Luk 8:5 A man went out to put in seed, and while he was doing it, some was dropped by the wayside and it was crushed under foot, and was taken by the birds of heaven.
Luk 8:6 And some went on the rock, and when it came up it became dry and dead because it had no water.
Luk 8:7 And some went among thorns, and the thorns came up with it and it had no room for growth.
Luk 8:8 And some falling on good earth, came up and gave fruit a hundred times as much. And with these words he said in a loud voice, He who has ears, let him give ear.
Luk 8:9 And his disciples put questions to him about the point of the story.
Luk 8:10 And he said, To you is given knowledge of the secrets of the kingdom of God; but to the others, they are given in stories, so that seeing, they may not see, and though they give hearing, the sense will not be clear to them.
Luk 8:11 Now this is the point of the story: The seed is the word of God.
Luk 8:12 Those by the side of the road are those who have given hearing; then the Evil One comes and takes away the word from their hearts, so that they may not have faith and get salvation.
Luk 8:13 And those on the rock are those who with joy give hearing to the word; but having no root, they have faith for a time, and when the test comes they give up.
Luk 8:14 And those which went among thorns are those who have given hearing, and go on their way, but they are overcome by cares and wealth and the pleasures of life, and they give no fruit.
Luk 8:15 And those in the good earth are those who, having given ear to the word, keep it with a good and true heart, and in quiet strength give fruit.
Luk 8:16 No man, when the light is lighted, puts a cover over it, or puts it under a bed, but he puts it on its table, so that those who come in may see the light.
Luk 8:17 For nothing is put out of view which will not be made clear, and nothing is secret of which the knowledge will not come to light.
Luk 8:18 So take care how you give hearing, for to him who has will be given, and from him who has not will be taken even what he seems to have.