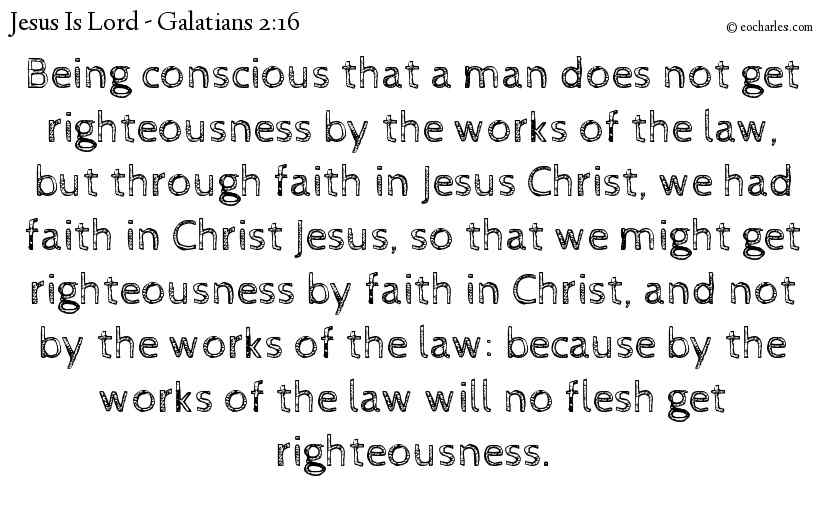 Thank you Jesus , for revealing your Gospel.1)Gal 2:2 I went in response to a revelation, and in a private meeting with the reputed leaders, I explained to them the gospel that I’m proclaiming to the gentiles. I did this because I was afraid that I was running or had run my life’s race for nothing. (ISV)
Thank you, Jesus, for revealing the truth of your gospel so no one can enslave us by imposing anything else than the freedom that is in Jesus. 2)Gal 2:4 However, false brothers were secretly brought in. They slipped in to spy on the freedom we have in the Messiah Jesus so that they might enslave us. (ISV)
The freedom that is in Jesus, will ALWAYS remain with us. 3)Gal 2:5 But we did not give in to them for a moment, so that the truth of the gospel might always remain with you. (ISV)
Because we KNOW that laws don’t justify or save, we know that it is The Faith Of Jesus The Messiah that justifies. 4)Gal 2:16 yet we know that a person is not justified by doing what the Law requires, but rather by the faithfulness of Jesus the Messiah. We, too, have believed in the Messiah Jesus so that we might be justified by the faithfulness of the Messiah and not by doing what the Law requires, for no human being will be justified by doing what the Law requires. (ISV)

Through the law I died, so I live for God. 5)Gal 2:19 For through the Law I died to the Law so that I might live for God. I have been crucified with the Messiah. (ISV)
So I am dead, alive only by the faith of Jesus, Son of God, who loves me, and gave his life for me. 6)Gal 2:20 I no longer live, but the Messiah lives in me, and the life that I am now living in this body I live by the faithfulness of the Son of God, who loved me and gave himself for me. (ISV)
And Jesus did not die for nothing, God’s grace is the only thing that is enough. 7)Gal 2:21 I do not misapply God’s grace, for if righteousness comes about by doing what the Law requires, then the Messiah died for nothing. (ISV)
So I thank you LORD, For your continuous and everlasting grace. 8)Psa 103:1 Davidic. Bless the LORD, My soul, and all that is within me, bless his holy name.
Psa 103:2 Bless the LORD, My soul, and never forget any of his benefits:
Psa 103:3 He continues to forgive all your sins, he continues to heal all your diseases,
Psa 103:4 he continues to redeem your life from the Pit, and he continually surrounds you with gracious love and compassion.
Psa 103:5 He keeps satisfying you with good things, and he keeps renewing your youth like the eagle’s.
Psa 103:6 The LORD continually does what is right, executing justice for all who are being oppressed.
Psa 103:7 He revealed his plans to Moses and his deeds to the people of Israel.
Psa 103:8 The LORD is compassionate and gracious, patient, and abundantly rich in gracious love.
Psa 103:9 He does not chasten continuously or remain distant for all time.
Psa 103:10 He neither deals with us according to our sins, nor repays us equivalent to our iniquity.
Psa 103:11 As high as heaven rises above earth, so his gracious love strengthens those who fear him.
Psa 103:12 As distant as the east is from the west, that is how far he has removed our sins from us.
Psa 103:13 As a father has compassion for his children, so the LORD has compassion for those who fear him.
Psa 103:14 For he knows how we were formed, aware that we were made from dust.
Psa 103:15 A person’s life is like grass—it blossoms like wild flowers,
Psa 103:16 but when the wind blows through it, it withers away and no one remembers where it was.
Psa 103:17 Yet the LORD’s gracious love remains throughout eternity for those who fear him and his righteous acts extend to their children’s children,
Psa 103:18 to those who keep his covenant and to those who remember to observe his precepts.
Psa 103:19 The LORD has established his throne in heaven and his kingdom rules over all.
Psa 103:20 Bless the LORD, you angels who belong to him, you mighty warriors who carry out his commands, who are obedient to the sound of his words.
Psa 103:21 Bless the LORD, all his heavenly armies, his ministers who do his will.
Psa 103:22 Bless the LORD, all his creation, in all the places of his dominion. Bless the LORD, My soul.
(ISV)

One thought on “The Freedom That Is In Jesus Christ”