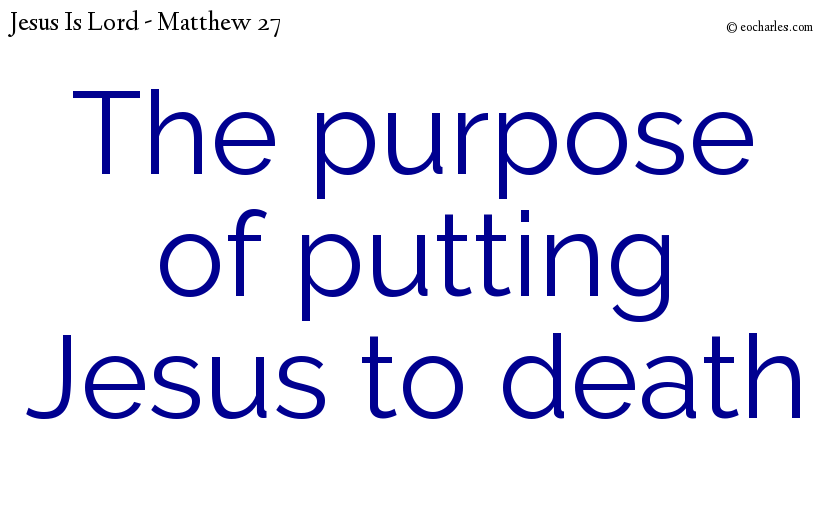 Now when it was morning, all the chief priests and those in authority took thought together with the purpose of putting Jesus to death.
Matthew 27:1

Pilate says to them, What, then, am I to do with Jesus, who is named Christ? They all say, Let him be put to death on the cross.
Matthew 27:22

1)Joh 10:17 For this reason am I loved by the Father, because I give up my life so that I may take it again.
Joh 10:18 No one takes it away from me; I give it up of myself. I have power to give it up, and I have power to take it again. These orders I have from my Father. 2)Rev 5:6 And I saw in the middle of the high seat and of the four beasts, and in the middle of the rulers, a Lamb in his place, which seemed as if it had been put to death, having seven horns and seven eyes, which are the seven Spirits of God, sent out into all the earth.
Rev 5:7 And he came and took it out of the right hand of him who was seated on the high seat.
Rev 5:8 And when he had taken the book, the four beasts and the four and twenty rulers went down on their faces before the Lamb, having every one an instrument of music, and gold vessels full of perfumes, which are the prayers of the saints.
Rev 5:9 And their voices are sounding in a new song, saying, It is right for you to take the book and to make it open: for you were put to death and have made an offering to God of your blood for men of every tribe, and language, and people, and nation,
Rev 5:10 And have made them a kingdom and priests to our God, and they are ruling on the earth.
Rev 5:11 And I saw, and there came to my ears the sound of a great number of angels round about the high seat and the beasts and the rulers; and the number of them was ten thousand times ten thousand, and thousands of thousands;
Rev 5:12 Saying with a great voice, It is right to give to the Lamb who was put to death, power and wealth and wisdom and strength and honour and glory and blessing.

Mat 27:22 Pilate says to them, What, then, am I to do with Jesus, who is named Christ? They all say, Let him be put to death on the cross.

Rev 21:22 And I saw no Temple there; because the Lord God, the Ruler of all, and the Lamb are its Temple.
Rev 21:23 And the town has no need of the sun, or of the moon, to give it light: for the glory of God did make it light, and the light of it is the Lamb.