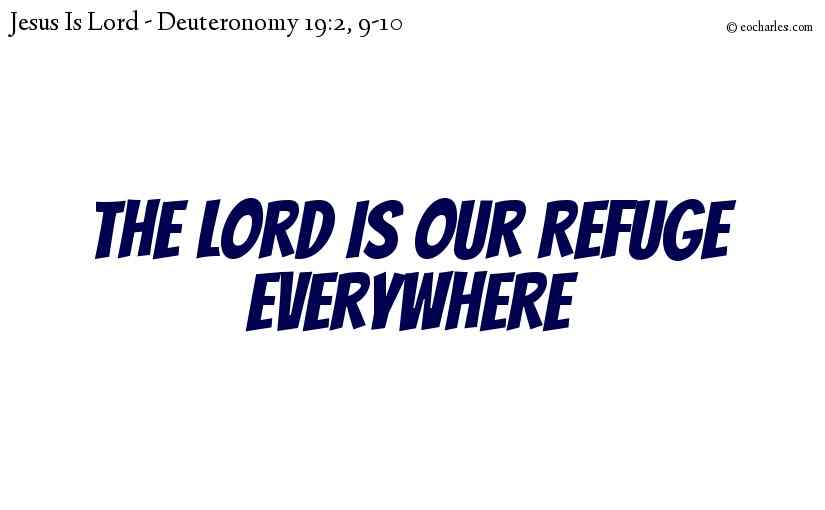 You are to have three towns marked out in the land which the Lord your God is giving you for your heritage.
Deuteronomy 19:2

Deu 19:9 If you keep and do all these orders which I give you today, loving the Lord your God and walking ever in his ways; then let three more towns, in addition to these three, be marked out for you:
Deu 19:10 So that in all your land, which the Lord your God is giving you for your heritage, no man may be wrongly put to death, for which you will be responsible. 1)Deu 19:4 This is to be the rule for anyone who goes in flight there, after causing the death of his neighbour in error and not through hate;
Deu 19:5 For example, if a man goes into the woods with his neighbour for the purpose of cutting down trees, and when he takes his axe to give a blow to the tree, the head of the axe comes off, and falling on to his neighbour gives him a wound causing his death; then the man may go in flight to one of these towns and be safe:
Deu 19:6 For if not, he who has the right of punishment may go running after the taker of life in the heat of his wrath, and overtake him because the way is long, and give him a death-blow; though it is not right for him to be put to death because he was not moved by hate.
2)Pro 18:10 The name of the Lord is a strong tower: the upright man running into it is safe. 3)1Jn 3:15 Anyone who has hate for his brother is a taker of life, and you may be certain that no taker of life has eternal life in him.

Rom 10:8 But what does it say? The word is near you, in your mouth and in your heart: that is, the word of faith of which we are the preachers:
Rom 10:9 Because, if you say with your mouth that Jesus is Lord, and have faith in your heart that God has made him come back from the dead, you will have salvation:
Rom 10:10 For with the heart man has faith to get righteousness, and with the mouth he says that Jesus is Lord to get salvation. 4)Pro 18:10 The name of the Lord is a strong tower: the upright man running into it is safe.