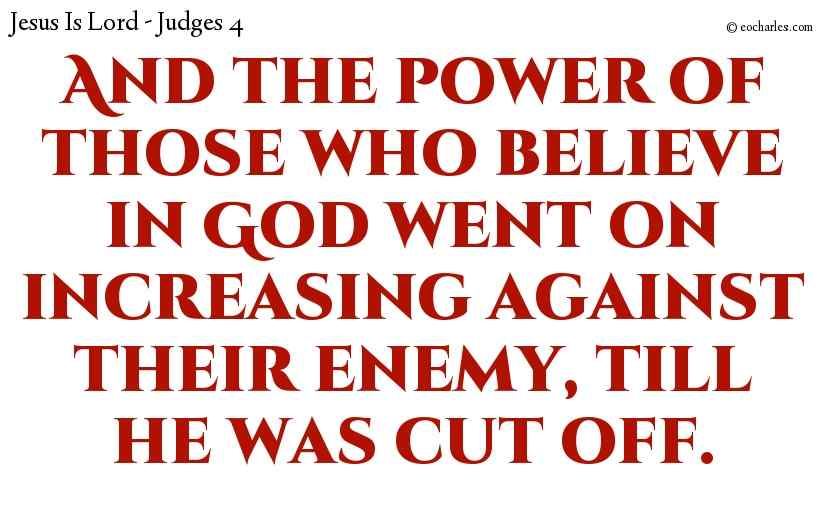 And the power of the children of Israel went on increasing against Jabin, king of Canaan, till he was cut off.
Judges 4:24

Jdg 4:1 And the children of Israel again did evil in the eyes of the Lord when Ehud was dead.

Jdg 4:6 And she sent for Barak, the son of Abinoam, from Kedesh-naphtali, and said to him, Has not the Lord, the God of Israel, given orders saying, Go and get your force into line in Mount Tabor, and take with you ten thousand men of the children of Naphtali and of the children of Zebulun?
Jdg 4:7 And I will make Sisera, the captain of Jabin’s army, with his war-carriages and his forces, come against you at the river Kishon, where I will give him into your hands.
Jdg 4:8 And Barak said to her, If you will go with me then I will go; but if you will not go with me I will not go.
Jdg 4:9 And she said, I will certainly go with you: though you will get no honour in your undertaking, for the Lord will give Sisera into the hands of a woman. So Deborah got up and went with Barak to Kedesh.

Jdg 4:14 Then Deborah said to Barak, Up! for today the Lord has given Sisera into your hands: has not the Lord gone out before you? So Barak went down from Mount Tabor and ten thousand men after him.

Jdg 4:24 And the power of the children of Israel went on increasing against Jabin, king of Canaan, till he was cut off.