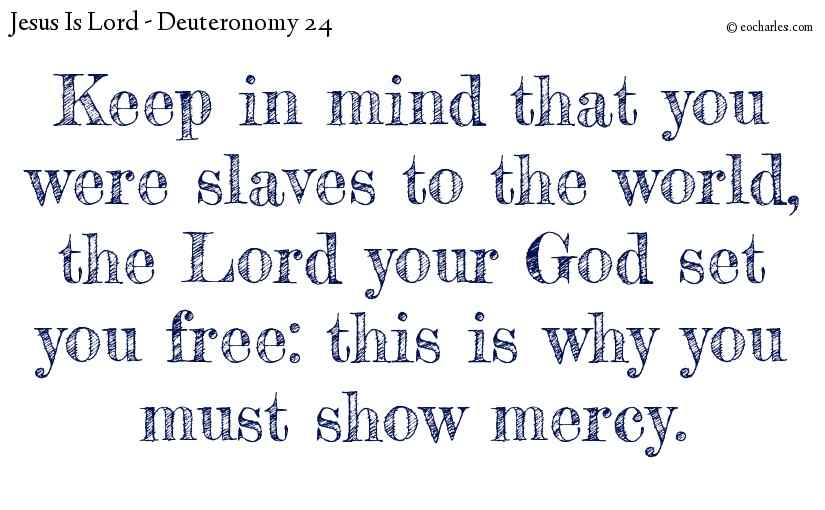 But keep in mind that you were a servant in the land of Egypt, and the Lord your God made you free: for this is why I give you orders to do this.
Deuteronomy 24:18

Keep in mind that you were a servant in the land of Egypt: for this is why I give you orders to do this.
Deuteronomy 24:22

Deu 24:1 If a man takes a wife, and after they are married she is unpleasing to him because of some bad quality in her, let him give her a statement in writing and send her away from his house.

Deu 24:5 A newly married man will not have to go out with the army or undertake any business, but may be free for one year, living in his house for the comfort of his wife.

Deu 24:6 No one is to take, on account of a debt, the stones with which grain is crushed: for in doing so he takes a man’s living.

Deu 24:10 If you let your brother have the use of anything which is yours, do not go into his house and take anything of his as a sign of his debt;
Deu 24:11 But keep outside till he comes out and gives it to you.
Deu 24:12 If he is a poor man, do not keep his property all night;
Deu 24:13 But be certain to give it back to him when the sun goes down, so that he may have his clothing for sleeping in, and will give you his blessing: and this will be put to your account as righteousness before the Lord your God.

Deu 24:14 Do not be hard on a servant who is poor and in need, if he is one of your countrymen or a man from another nation living with you in your land.
Deu 24:15 Give him his payment day by day, not keeping it back over night; for he is poor and his living is dependent on it; and if his cry against you comes to the ears of the Lord, it will be judged as sin in you.

Deu 24:17 Be upright in judging the cause of the man from a strange country and of him who has no father; do not take a widow’s clothing on account of a debt

Deu 24:19 When you get in the grain from your field, if some of the grain has been dropped by chance in the field, do not go back and get it, but let it be for the man from a strange land, the child without a father, and the widow: so that the blessing of the Lord your God may be on all the work of your hands.

Deu 24:20 When you are shaking the fruit from your olive-trees, do not go over the branches a second time: let some be for the man from a strange land, the child without a father, and the widow.

Deu 24:21 When you are pulling the grapes from your vines, do not take up those which have been dropped; let them be for the man from a strange land, the child without a father, and the widow.

Show The Love of God and his mercy in all the things you do.
1)Joh 3:16 For God had such love for the world that he gave his only Son, so that whoever has faith in him may not come to destruction but have eternal life.
By his grace you are saved, So show his mercy. 2)Eph 2:8 Because by grace you have salvation through faith; and that not of yourselves: it is given by God:
Eph 2:9 Not by works, so that no man may take glory to himself.
Eph 2:10 For by his act we were given existence in Christ Jesus to do those good works which God before made ready for us so that we might do them.