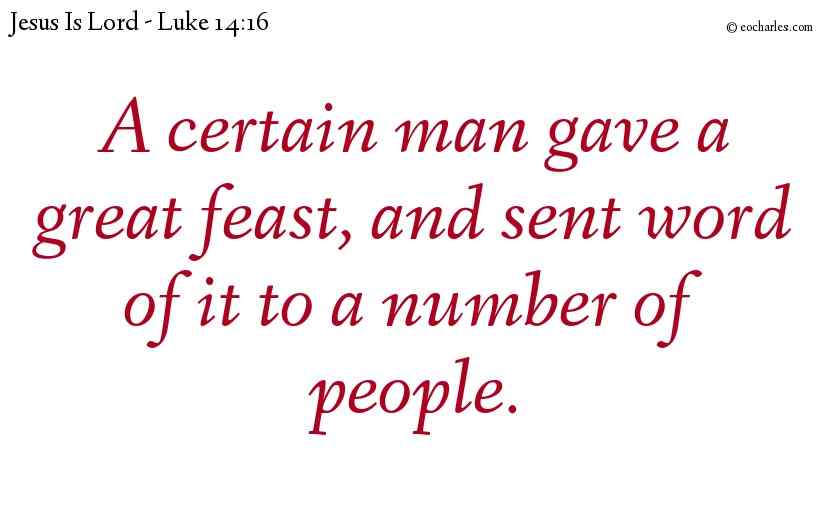 And he said to them, A certain man gave a great feast, and sent word of it to a number of people.
Luke 14:16

Luk 14:33 And so whoever is not ready to give up all he has may not be my disciple.

See also in the testimony of Matthew;

Mat 22:1 And Jesus, talking to them again in stories, said:
Mat 22:2 The kingdom of heaven is like a certain king, who made a feast when his son was married,
Mat 22:3 And sent out his servants to get in the guests to the feast: and they would not come.
Mat 22:4 Again he sent out other servants, with orders to say to the guests, See, I have made ready my feast: my oxen and my fat beasts have been put to death, and all things are ready: come to the feast.
Mat 22:5 But they gave no attention, and went about their business, one to his farm, another to his trade:
Mat 22:6 And the rest put violent hands on his servants, and did evil to them, and put them to death.
Mat 22:7 But the king was angry; and he sent his armies, and those who had put his servants to death he gave to destruction, burning down their town with fire.
Mat 22:8 Then he said to his servants, The feast is ready but the guests were not good enough.
Mat 22:9 Go then to the cross-roads, and get all those whom you see to come to the bride-feast.
Mat 22:10 And those servants went out into the streets, and got together all those whom they came across, bad and good: and the feast was full of guests.
Mat 22:11 But when the king came in to see the guests, he saw there a man who had not on a guest’s robe;
Mat 22:12 And he says to him, Friend, how came you in here not having a guest’s robe? And he had nothing to say.
Mat 22:13 Then the king said to the servants, Put cords round his hands and feet and put him out into the dark; there will be weeping and cries of sorrow.
Mat 22:14 For out of all to whom the good news has come, only a small number will get salvation.