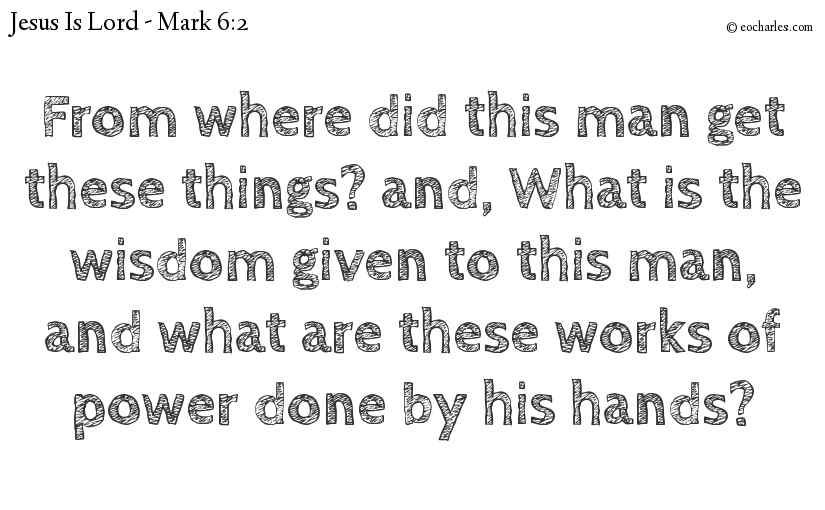 And when the Sabbath day had come, he was teaching in the Synagogue; and a number of people hearing him were surprised, saying, From where did this man get these things? and, What is the wisdom given to this man, and what are these works of power done by his hands?
Mark 6:2

Mar 6:50 For they all saw him, and were troubled. But straight away he said to them, Take heart, it is I, have no fear.

Mar 6:3 Is not this the woodworker, the son of Mary, and brother of James and Joses and Judas and Simon? and are not his sisters here with us? And they were bitter against him.

Mar 6:7 And he gave orders to the twelve, and sent them out two by two; and he gave them authority over the unclean spirits

Mar 6:41 And he took the five cakes of bread and the two fishes and, looking up to heaven, he said words of blessing over them; and when the cakes were broken, he gave them to the disciples to put before the people; and he made division of the two fishes among them all.

Mar 6:48 And seeing that they had trouble in getting their boat through the water, because the wind was against them, about the fourth watch of the night he came to them, walking on the sea; and he would have gone past them

Mar 6:50 For they all saw him, and were troubled. But straight away he said to them, Take heart, it is I, have no fear.