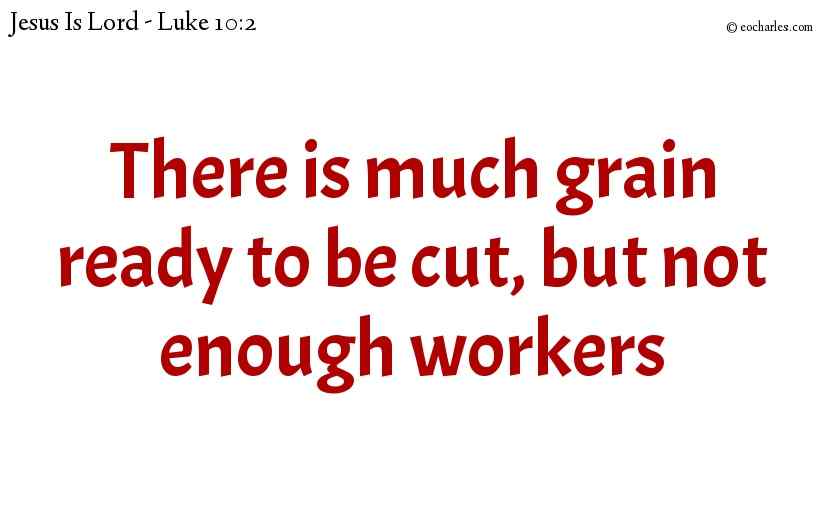 And he said to them, There is much grain ready to be cut, but not enough workers: so make prayer to the Lord of the grain-fields that he will send workers to get in the grain.
Luke 10:2

Luk 10:1 Now after these things, the Lord made selection of seventy others and sent them before him, two together, into every town and place where he himself was about to come.
Luk 10:2 And he said to them, There is much grain ready to be cut, but not enough workers: so make prayer to the Lord of the grain-fields that he will send workers to get in the grain.

Luk 10:30 And Jesus, answering him, said, A certain man was going down from Jerusalem to Jericho, and he got into the hands of thieves, who took his clothing and gave him cruel blows, and when they went away, he was half dead.
Luk 10:31 And by chance a certain priest was going down that way: and when he saw him, he went by on the other side.
Luk 10:32 And in the same way, a Levite, when he came to the place and saw him, went by on the other side.
Luk 10:33 But a certain man of Samaria, journeying that way, came where he was, and when he saw him, he was moved with pity for him,
Luk 10:34 And came to him and put clean linen round his wounds, with oil and wine; and he put him on his beast and took him to a house and took care of him.

Luk 10:38 Now, while they were on their way, he came to a certain town; and a woman named Martha took him into her house.
Luk 10:39 And she had a sister, by name Mary, who took her seat at the Lord’s feet and gave attention to his words.
Luk 10:40 But Martha had her hands full of the work of the house, and she came to him and said, Lord, is it nothing to you that my sister has let me do all the work? Say to her that she is to give me some help.
Luk 10:41 But the Lord, answering, said to her, Martha, Martha, you are full of care and troubled about such a number of things:
Luk 10:42 Little is needed, or even one thing only: for Mary has taken that good part, which will not be taken away from her.