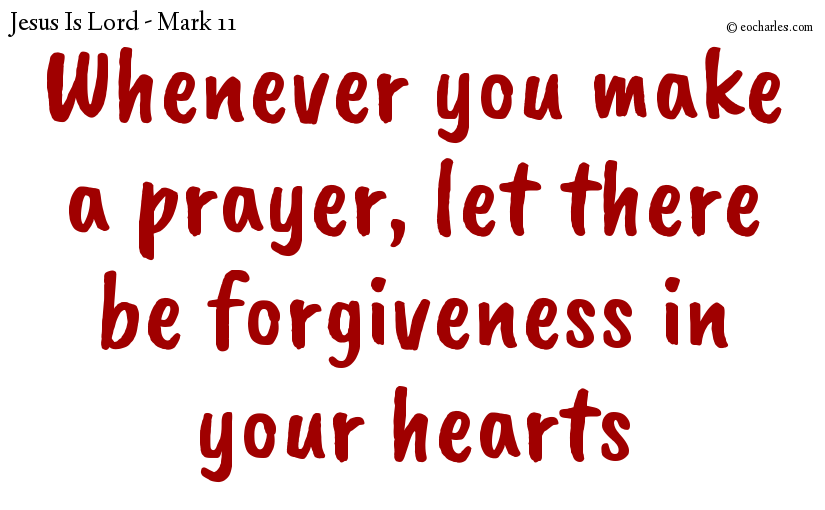 And whenever you make a prayer, let there be forgiveness in your hearts, if you have anything against anyone; so that you may have forgiveness for your sins from your Father who is in heaven.
Mark 11:25

1)Mat 18:23 For this reason the kingdom of heaven is like a king, who went over his accounts with his servants.
Mat 18:24 And at the start, one came to him who was in his debt for ten thousand talents.
Mat 18:25 And because he was not able to make payment, his lord gave orders for him, and his wife, and his sons and daughters, and all he had, to be given for money, and payment to be made.
Mat 18:26 So the servant went down on his face and gave him worship, saying, Lord, give me time to make payment and I will give you all.
Mat 18:27 And the lord of that servant, being moved with pity, let him go, and made him free of the debt.
Mat 18:28 But that servant went out, and meeting one of the other servants, who was in debt to him for one hundred pence, he took him by the throat, saying, Make payment of your debt.
Mat 18:29 So that servant went down on his face, requesting him and saying, Give me time and I will make payment to you.
Mat 18:30 And he would not: but went and put him into prison till he had made payment of the debt.
Mat 18:31 So when the other servants saw what was done they were very sad, and came and gave word to their lord of what had been done.
Mat 18:32 Then his lord sent for him and said, You evil servant; I made you free of all that debt, because of your request to me:
Mat 18:33 Was it not right for you to have mercy on the other servant, even as I had mercy on you?
Mat 18:34 And his lord was very angry, and put him in the hands of those who would give him punishment till he made payment of all the debt.
Mat 18:35 So will my Father in heaven do to you, if you do not everyone, from your hearts, give forgiveness to his brother.