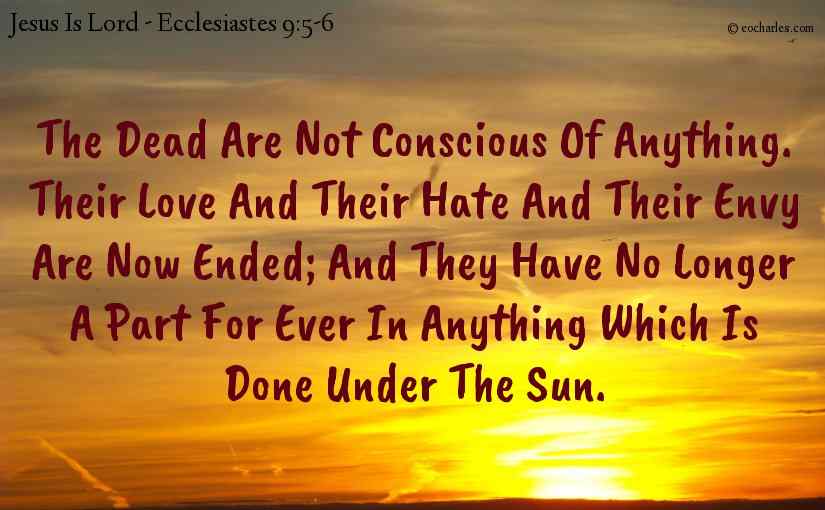 The living are conscious that death will come to them, but the dead are not conscious of anything, and they no longer have a reward, because there is no memory of them.
Their love and their hate and their envy are now ended; and they have no longer a part for ever in anything which is done under the sun.
Ecclesiastes 9:5-6

The dead are not conscious of anything.
Their love and their hate and their envy are now ended; and they have no longer a part for ever in anything which is done under the sun.

The dead are just that, inactive, not participating in anything under the sun.

2Co 11:14 And it is no wonder; for even Satan himself is able to take the form of an angel of light.
2Co 11:15 So it is no great thing if his servants make themselves seem to be servants of righteousness; whose end will be the reward of their works.
Deu 18:10 Let there not be seen among you anyone who makes his son or his daughter go through the fire, or anyone using secret arts, or a maker of strange sounds, or a reader of signs, or any wonder-worker,
Deu 18:11 Or anyone using secret force on people, or putting questions to a spirit, or having secret knowledge, or going to the dead for directions.
Deu 18:12 For all who do such things are disgusting to the Lord; and because of these disgusting things the Lord your God is driving them out before you.
Lev 19:31 Do not go after those who make use of spirits, or wonder-workers; do not go in their ways or become unclean through them: I am the Lord your God.
Lev 20:6 And whoever goes after those who make use of spirits and wonder-workers, doing evil with them, against him will my face be turned, and he will be cut off from among his people.

The Rich Man and Lazarus
Luk 16:19 Now there was a certain man of great wealth, who was dressed in fair clothing of purple and delicate linen, and was shining and glad every day.
Luk 16:20 And a certain poor man, named Lazarus, was stretched out at his door, full of wounds,
Luk 16:21 Desiring the broken bits of food which came from the table of the man of wealth; and even the dogs came and put their tongues on his wounds.
Luk 16:22 And in time the poor man came to his end, and angels took him to Abraham’s breast. And the man of wealth came to his end, and was put in the earth.
Luk 16:23 And in hell, being in great pain, lifting up his eyes he saw Abraham, far away, and Lazarus on his breast.
Luk 16:24 And he gave a cry and said, Father Abraham, have mercy on me and send Lazarus, so that he may put the end of his finger in water and put it on my tongue, for I am cruelly burning in this flame.
Luk 16:25 But Abraham said, Keep in mind, my son, that when you were living, you had your good things, while Lazarus had evil things: but now, he is comforted and you are in pain.
Luk 16:26 And in addition, there is a deep division fixed between us and you, so that those who might go from here to you are not able to do so, and no one may come from you to us.
Luk 16:27 And he said, Father, it is my request that you will send him to my father’s house;
Luk 16:28 For I have five brothers; and let him give them an account of these things, so that they may not come to this place of pain.
Luk 16:29 But Abraham said, They have Moses and the prophets; let them give ear to what they say.
Luk 16:30 And he said, No, father Abraham, but if someone went to them from the dead, their hearts would be changed.
Luk 16:31 And he said to him, If they will not give attention to Moses and the prophets, they will not be moved even if someone comes back from the dead.

Hos 4:6 My people are destroyed for lack of knowledge: because thou hast rejected knowledge, I will also reject thee, that thou shalt be no priest to me: seeing thou hast forgotten the law of thy God, I will also forget thy children.

Job 33:14 For God gives his word in one way, even in two, and man is not conscious of it:
Job 33:15 In a dream, in a vision of the night, when deep sleep comes on men, while they take their rest on their beds;
Job 33:16 Then he makes his secrets clear to men, so that they are full of fear at what they see;
Job 33:17 In order that man may be turned from his evil works, and that pride may be taken away from him

So Heavenly Father, You give us your dreams and your visions, You tell us to our ears.
We are your sheep, we hear your voice and follow you.
Put a strong block in our spirits to not commune with familiar spirits,
And a strong encouragement to always only commune with you!
For you are the God of the living and not of the dead!
Amen, Let It Be So, Amen.

Listen to the full broadcast here