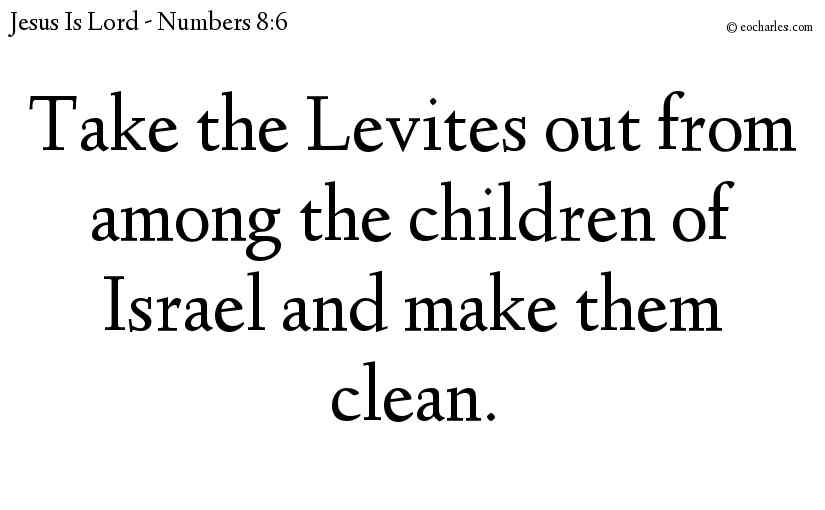 Take the Levites out from among the children of Israel and make them clean.
Numbers 8:6

Num 8:6 Take the Levites out from among the children of Israel and make them clean. 1)2Co 7:1 Because God, then, will give us such rewards, dear brothers, let us make ourselves clean from all evil of flesh and spirit, and become completely holy in the fear of God. 2)Jas 4:8 Come near to God and he will come near to you. Make your hands clean, you evil-doers; put away deceit from your hearts, you false in mind.

Num 8:21 And the Levites were made clean from sin, and their clothing was washed, and Aaron gave them for a wave offering before the Lord; and Aaron took away their sin and made them clean.
Num 8:22 And then the Levites went in to do their work in the Tent of meeting before Aaron and his sons: all the orders which the Lord had given Moses about the Levites were put into effect. 3)2Ch 30:15 Then on the fourteenth day of the second month they put the Passover lambs to death: and the priests and the Levites were shamed, and made themselves holy and took burned offerings into the house of the Lord.
2Ch 30:16 And they took their places in their right order, as it was ordered in the law of Moses, the man of God: the priests draining out on the altar the blood given them by the Levites.
2Ch 30:17 For there were still a number of the people there who had not made themselves holy: so the Levites had to put Passover lambs to death for those who were not clean, to make them holy to the Lord. 4)2Ch 30:27 Then the priests and the Levites gave the people a blessing: and the voice of their prayer went up to the holy place of God in heaven. 5)2Ch 31:2 Then Hezekiah put in order the divisions of the priests and Levites, every man in his division, in relation to his work, for the burned offerings and peace-offerings, and for the ordering of worship and for giving praise at the doors of the Lord’s house. 6)2Ch 35:8 And his captains freely gave an offering to the people, the priests, and the Levites. Hilkiah and Zechariah and Jehiel, the rulers of the house of God, gave to the priests for the Passover offerings two thousand, six hundred small cattle and three hundred oxen.
2Ch 35:9 And Conaniah and Shemaiah and Nethanel, his brothers, and Hashabiah and Jeiel and Jozabad, the chiefs of the Levites, gave to the Levites for the Passover offerings five thousand small cattle and five hundred oxen.
2Ch 35:10 So everything was made ready and the priests took their places with the Levites in their divisions, as the king had said.
2Ch 35:11 And they put the Passover lambs to death, the blood being drained out by the priests when it was given to them, and the Levites did the skinning.
2Ch 35:12 And they took away the burned offerings, so that they might give them to be offered to the Lord for the divisions of the families of the people, as it is recorded in the book of Moses. And they did the same with the oxen.
2Ch 35:13 And the Passover lamb was cooked over the fire, as it says in the law; and the holy offerings were cooked in pots and basins and vessels, and taken quickly to all the people.
2Ch 35:14 And after that, they made ready for themselves and for the priests; for the priests, the sons of Aaron, were offering the burned offerings and the fat till night; so the Levites made ready what was needed for themselves and for the priests, the sons of Aaron.
2Ch 35:15 And the sons of Asaph, the makers of melody, were in their places, as ordered by David and Asaph and Heman and Jeduthun, the king’s seer; and the door-keepers were stationed at every door: there was no need for them to go away from their places, for their brothers the Levites made ready for them. 7)Eph 4:8 For this reason he says, He went up on high, taking his prisoners with him, and gave freely to men.
Eph 4:9 Now this, He went up, what is it but that he first went down into the lower parts of the earth?
Eph 4:10 He who went down is the same who went up far over all the heavens so that he might make all things complete.
Eph 4:11 And he gave some as Apostles, and some, prophets; and some, preachers of the good news; and some to give care and teaching;
Eph 4:12 For the training of the saints as servants in the church, for the building up of the body of Christ